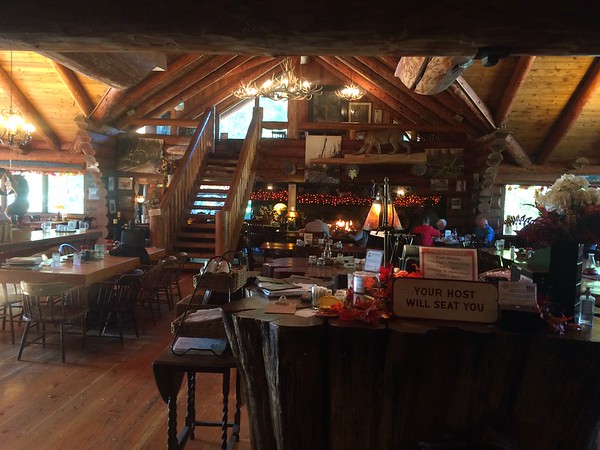 Wait to be seated

En-route from Champoeg State Park to Nehalem Bay State Park, we planned to take US Route 26 to Cannon Beach. From there we'd hop on US Route 101 South to Manzanita and Nehalem Bay.  Fortunately for us, one of our camp neighbors at Champoeg told us about Camp 18, a well-regarded restaurant and lumber museum along the way.  With that and the need for a tank of gas in mind, we chose this route, which worked out quite well!

Camp 18 (Trip Advisor link) is an interesting stop, to say the least.  As you drive through the coastal mountains to get to Cannon Beach, which is an interesting drive (lots of winding roads, plenty of elevation changes to keep you intrigued while towing or driving an RV), you come upon this place.  From the road it's pretty hard to miss, with the large sign and the large quantities of lumbering equipment all around.  If you're headed West, it's on the left side of the road.

The equipment is fascinating to look at, and the restaurant is impressive.  It's built from large timber, especially the roof beam.  The place looks like something that would have been built back in the age of the great National Park lodges, but it was built in the 70's by a determined lumberman who still runs it today with his family.

As you can see from the photos here, it's quite a place - rustic and comfortable at the same time.  What you can't see here is the food and the great service.  We had a very tasty lunch here with two other couples.  There's plenty of parking and plenty of food, so don't miss it.

Found a new place to dwell

After driving west from Portland and Camp 18 and then South from Cannon Beach, we arrived at Nehalem Beach State Park. We hadn't bothered with reservations because we're camping post-Labor-Day and the website indicated there was plenty of space.  In our case this worked out fairly well, but a word to the wise - this campground is generally full from the first open day of spring camping right through early September, so you might want to get a reservation unless you're a late-season camper.

We had a minor challenge only because we had three couples camping, each with an RV.  The two other had a truck camper and an RV built on a Sprinter chassis - both relatively nimble in comparison to us.

We found spots for them right away, thinking we'd camp across in an empty spot...which turned out to be reserved.  So, we went around again to find something nearby.  We nabbed spot E-24, which was perfectly delightful though a few spaces farther from our friends than we had hoped for.

While this is a reservation campground, it seems they are still working out the kinks. So here's a little advice for spontaneous "who needs reservations" types like us - particularly if you arrive after the entrance station rangers have gone home.

First, check at the entrance and take a picture of the list of campsites reserved for that night so you don't accidentally grab one of them.  (Reserved sites are *not* marked in the campground - they're just on a list.)

Next, take a close look at the campground map - maybe take a picture of that too. Note that campsites on the inside of each loop are at right angles to the loop (ideal for small RV's and tents, etc.), while campsites on the outside are at an angle that makes them much easier for those trailers to use.

Then, keep your laptop and your hot spot handy so you can check each likely site to see whether it's open for just one night or as many nights as you need.  Pick one that's open for tonight as well as the coming nights to reduce the chances that you'll have to move once you get there.

Lastly, you can fill out and deposit the paperwork required to pay for your site for the night.  They take credit cards, so it's really quite convenient.  Next day when the rangers are back, you can visit in person to pay for and reserve the additional nights. 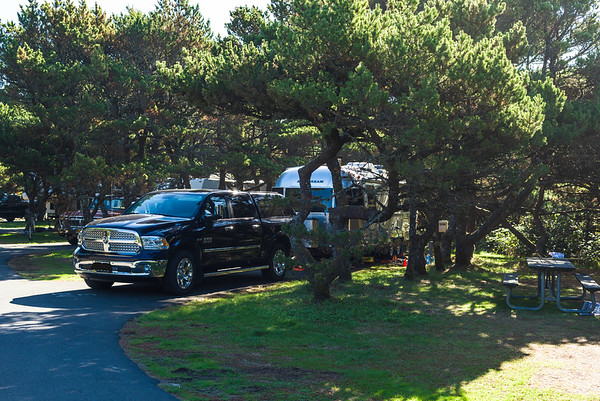 The beach here at Nehalem Bay State Park is fantastic for pretty much everything except swimming.  After all, we're facing the open Pacific Ocean and there's nothing between us and Japan. As re result, the waves are big and the rip is strong. We don't recommend a swim.  What we do recommend, however, are long walks and/or runs on the beach.  If you've a mind to bring your bike out here, that would be great as well - just ride on the wet sand!

The weather on this beach comes and goes quickly - almost like the surf.  One moment you're enjoying a sunny early afternoon, and the next you're surrounded by mist, the wind picks up, a chill hits, you, and the mist starts clinging to you trying to get you wet.  So, be prepared for most anything and you'll be good.

On this trip we suddenly discovered we've become kite nerds.  Over the past many years, we've periodically bought and then lost one cool kite after another. While cleaning out the house in recent months, we actually discovered that we'd simply misplaced them and that they were still in our possession - and even more importantly, they were in great shape!

So, we have roughly seven kites.  The list below shows what we have.  We had so much fun! It was really cool.  When a person stopped by to help us launch a kite, we gave him one to fly too.  He hung out with us for quite a while and said it was a real blast. That made the day even more fun.  We even flew our kites as the fog rolled in.  For a while, we could barely see them through the fog, and when we finally reeled them in, they were soaking wet.

(1) "large" parasail - this baby has a ton of string on it and pulls like a dragon on a leash.  It's awesome, flies in any conditions and loves a strong wind. You can hang any laundry on this kite that you want.  Spinners, extra tails, etc.

(2) "small" parasail - smaller version of the first one.  It's a gentle flier, doesn't pull too hard.  Unfortunately, it also flies a bit drunkenly, leaning always to one side.  Probably needs a harness adjustment but we don't know how to do that.  Next real kite shop we visit, this one gets a tune-up.

(3) "medium" parasail with a huge long tail - It's a really gentle flier, and has a long pretty tail.  It looks a little like a jelly fish when it's up there.  It doesn't like winds that are too strong - under heavy wind conditions, it flips itself upside down and backwards and then floats down to the ground.

(1) Stunt kite for novice flyers.  This baby is awesome.  It's fun to fly, easy to maneuver, and hardly ever crashes nose first into the sand.  Even when it does, it's ready to go back up and try again.

(2) "Large" Triangular box kite with wings.  This one looks like a hallucination.  Is it a delta kite?  Is it a box kite?  No, it's two, two two kites in one!  Flies great on the beach, loves long tails just 'cause they're pretty.

(3) Delta kite - This one is a puzzle.  Without tails it won't fly at all without zipping around and crashing into the ground.  However, once we mount twin 15' tails (one on each wing), it flies like a dream.  There's probably something wrong with the harness or the basic design, but we don't care now that we got it working.

(4) Multi-faceted box kite.  This one is a panic to put together.  While we're trying to assemble it, the kite keeps flipping itself inside out and upside down.  When we finally solve the topological puzzle and get it set, the kite flies like crazy.  Mid-strength winds are best.  Too strong and it eventually pitches into the dirt.  Too weak and it won't stay up.  In the right wind, it's awesome.