To begin another fun, fabulous six nights seven days of camping, we decided to stop off and spend a couple of nights at Castle Rock, WA, the gateway to Mount St. Helens.  This would be our first time seeing the volcano via the conventional path up Route 504, the Spirit Lake Highway that leads to the Johnston Ridge Observatory. We normally visit the volcano via the back route, from Randle, WA past Iron Creek Campground and up to Windy Ridge.

We reached our destination on a beautiful sunny Thursday afternoon, driving up from Exit 49 off I-5 to Seaquest State Park, which is just across from the Mount St. Helens visitor center.  (If you're headed toward the volcano from Castle Rock, you'll see the visitor center on the right a little before seeing the state park on the left.) As we drove by the visitor center to the park, intent on parking Rocinante, we glimpsed a crystal clear view of Mount St. Helens in the distance on our way into the park.

Seaquest is a nice park, with a large day use area and an interesting campground.  If you're camping with travel trailer like us, there aren't too many choices outside of the RV Loop (sites T-1 through T-16), but for an off-season last-minute trip, we had no qualms about just showing up and grabbing an open spot.  If you camp here during the high season, it's probably best to reserve a site.

As we drove through the campground, we looked at a few sites in the North loop that have water and electric service.  Of those, numbers 1, 4, 7, 15,  17 and 29 looked the most promising.  That said, keep in mind there is a very narrow squeeze on the loop road that passes from site 11 to site 18.  Trees on either side have clearly been hit multiple times by RV's squeezing by.  The left side of this image of site 13  shows one of the squeeze trees in question, alongside the loop road. Be careful!

Given the campground was mostly empty, we elected to move no to the RV loop which offers full hookups. It's pleasant enough when the campground is lightly occupied, but during peak season people would be camping nearly on top of each other - sites are jammed in as closely as any KOA you'd care to mention.  The camping area is surrounded by trees and has a few small trees scattered about, but it's really tight.  Given so few people were there this trip, we picked site T-13 and our closest neighbors were two campsites away.  Perfect!

Since we arrived to late on Thursday to make the 1+ hour drive up to the observatory, we decided to head up there on Friday.  Unfortunately for us, Friday was a typical fall PNW day - meaning low clouds, drizzle, and the volcano had been erased from view.  We walked down to the visitor center via a very nice pedestrian underpass.  We couldn't see anything at all from there.  So, we made the best of it by going inside the visitor center ($5.00 each).  We enjoyed all the exhibits and watched the movie.  It's really a great place to learn more about Mount St. Helens and the eruption, but it's not as much fun as going up to the ridge.

After touring the visitor center, we decided to take a walk around one of the local volcanic creations, known as Silver Lake.  This shallow lake was created by the flood of volcanic debris that came down from the mountain in the last eruption, damming up a couple of creeks.  It's a nice walk, highly recommended.  Sometimes there is a lot of wildlife, but today we saw only a couple of ducks.  This year the lake is quite low due to the drought, and that probably also contributed to the wildlife shortage.  We expected more migrating waterfowl to be hanging around, but we saw little.  Still, it's a pretty lake and the walk was pleasant. 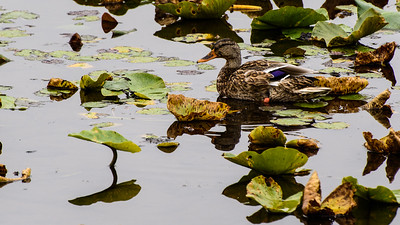 Later we did in fact attempt to visit Johnston's Ridge because the volcano-cam indicated some visibility.  However, the fog became so thick that we couldn't see more than ten feet ahead of us.  I'm not easily scared by this sort of thing, but this drive was pretty much terrifying.  There's one section where the road crosses Hoffstadt Creek via a high bridge.  The fog was so thick that we could see absolutely nothing to the left or right, and the bridge simply disappeared into the fog. Here's what that spot looks like on a sunny day.  On a clear day, it's merely scary. On this foggy day, it was mind-boggling.

We made it as far as the Mount St. Helens Forest Learning Center, sponsored by Weyerhauser. It's actually a pretty cool visitor's center, and we recommend you stop here on your way back from Johnston's Ridge if you have the time.  For us, however, it was the end of the line.  The road was so foggy and dangerous that we decided to turn back from here, regardless of what the volcano-cam suggested.

Making the best of it

On the way back down from the mountain, after dropping below the fog, and crossing the North fork of the Toutle River, we saw an interesting sign suggesting a visit to a "sediment dam" with a hike.  So we made the turn and drove to the end of that little road.  We parked our truck there and walked the couple of miles out to the dam.  This is what we saw. The dam, built and operated by the Corps of Engineers, is designed to capture volcanic sediment as it comes down  the mountain via Hoffstadt Creek.  The lake behind the dam is quite large, but also very shallow indeed.  We saw a flock of Canada geese waddling about in the shallows. It was well worth the visit and the pleasant hike.  Highly recommended!

So, maybe next time we'll make it up to Johnston's Ridge Observatory for a close up view of this side of the volcano.  For this time, however, we were foiled by the weather.

Saturday dawned sunny and beautiful, but St. Helens was still wearing her shroud, and we saw nothing of her before heading south toward Portland for the next stop on our tour.