The Leap for Home

Having successfully escaped the grasp of that spring snowstorm, we were on  a roll and determined to get home.  So our travel days grew longer and our stops shorter.  The distance from Billings to Missoula, roughly 360 miles, was one of our biggest travel days of the entire journey.  While it's certainly possible to drive that far and more in a day, this kind of distance changes things.  Instead of a voyage of exploration and adventure, we're seriously on the road, making up some mileage.

On the way to Missoula from Billings we of course passed through Butte.  We didn't get a chance to stop there, but they seem to have a gigantic open pit mine, called the Berkeley Pit, which is a Superfund site due to the highly acidic, incredibly toxic, water in that hole. The walls of the pit can be easily seen from I-90, but if we wanted to go in and see it up close from an observation platform, that'd cost us an extra couple of bucks. Maybe next time.

At the end of a long day of driving, we stopped for the evening at Jim and Mary's RV Park, which is a  lovely private RV park just west of Missoula. It's far enough from I-90 to avoid most of the noise.The late check-in process was simple and they made it easy to get settled even though we arrived well after the office had closed for the evening.  Spots were relatively level, spacious and we had an easy time getting parked.  There were plenty of trees, and the landscaping was nice.  Rest rooms and showers were absolutely top notch, which was nice after a long day.  The shower in our rig works fine and we enjoy it, but after a long day it's really nice to step into a full-sized shower with unlimited hot water.

Oh, and even though we discovered later that a train track isn't too far away, that sound didn't bother us in the least. We liked this park, and would definitely stay here again if we were in the area.

The next morning, we headed out as early as we could, making tracks for Spokane and points west.  We had a particular goal in mind at Spokane, as we had made an appointment to see the good folks at Airstream of Spokane, about a few warranty items that had cropped up during our trip.  Rocinante had popped one of her internal rivets, the fan in her shower had decided to stop working, one of our ceiling lights in the "living room" was trying to fall out of the ceiling, and our tank level indicators were completely out of whack, providing utterly useless readings as to how full they were.

We had spoken with the owner, Nick Dietz, a few days ago and he  agreed to squeeze us in for some quick work on these minor items.  WIth the time change (MST to PST) we managed to arrive at his dealership shortly after noon.

After checking in with Nick and dropping our trailer for service, we went his suggestion, to the Cottage Cafe to enjoy a bite to eat and pass the time while they worked on Rocinante. What a great idea!  The cafe was nearby and had great food / service.  We thoroughly enjoyed our lunch, though we opted for a mix of breakfast and lunch items given our early start to the day and change in time zones.

So, after a delightful meal we headed back to Airstream of Spokane to check on Rocinante.  They got her buttoned up in record time.  It was a great experience working with Nick, and we'd highly recommend you check them for service on your Airstream (or even shop for a new one) if you're in the area. There's a lot to be said for personal service and working directly with the owners of the dealership to get what you need when you need it.

After picking up Rocinante, fully repaired and once again ready for duty, we hopped back on I-90 and continued our westward journey with plans to spend the evening in Moses Lake.  Doing so would put us within easy reach of home the next day.

As planned, we hit I-90 and pushed hard to get ourselves to Moses Lake, WA, by the end of the travel day.  Eastern Washington, not to be outdone by Montana, has some very big skies of its own, as you can see from the picture. Skies were clear and blue, and the weather optimal for travel.  So, we made tracks and had a great afternoon of driving.

We stopped for the evening at Suncrest RV Park (& Storage) in Moses Lake, arriving shortly before the office closed for the day.  The park was largely empty of tourists like ourselves, though it had a decent number of longer-term residents who had clearly spent at least a good chunk of the winter there.  It's a nice, well maintained and clean RV park, however, and we felt very comfortable there.  We stayed in the first loop along with everyone else, close to the office and facilities.  The pool wasn't open yet, because it's still too early in the season, but we had a nice time walking around the park after we got parked.  Speaking of parking, the site was perfectly level, and all connections were easily made.  The spot just right for us to stay hitched up for the night, which would save us some time the next morning.  Perfect!

We were finally back in weather that allowed us to open all of Rocinante's windows, put out the awnings to keep her (and us) cool inside, and we generally had a lovely evening.  Once the sun went down things cooled off in a hurry, so I hopped outside to close up the awnings before bed, and then we closed the windows as well, leaving a few vents open for fresh air.  There was some road noise from I-90, but it was a great place to spend the night, and we'd definitely stay here again the next time we're in Moses Lake.

We had a great time driving the last miles home on Tuesday.  The weather was perfect, the roads were open, and it was a great drive.  We ate up the miles with Rocinante, effortlessly climbing over Snoqualmie Pass on I-90.  Along the way we passed through the never-ending construction along the shores of Keechelus Lake, partying along with everyone else as we joined a caravan known as a "rolling slowdown" through the construction zone.  We had not experienced one of these before.  The construction folks actually put a couple of heavy vehicles on the highway, blocking both lanes, and then those vehicles drive about 25 MPH through the construction zone.  Nobody could pass them, so we just followed along until they hit a turnout after passing the end of the zone.  On the plus side, it gave us a chance to appreciate the scenery as we drove along the lake - something we'd ordinarily do at a much higher speed.

As we crossed the pass, we also noticed just how little snow lies in the mountains above Seattle.  While we've had plenty of rain up to now west of the Cascades, it's going to be a tough summer for anybody who depends on the snowpack for irrigation or drinking water.  We have a feeling that before the summer is out, we will be crying out for that missing snowpack.  We also hope that William Shatner's idea of a kick-starter to build a water pipeline from Seattle to SoCal doesn't happen.  By August, we won't have much to spare!

Rocinante is parked right now, but we'll recharge our batteries and have additional adventures.  In the meantime, we'll post occasional updates here on things that might be of interest, so check back now and then.  We'll do lunch! 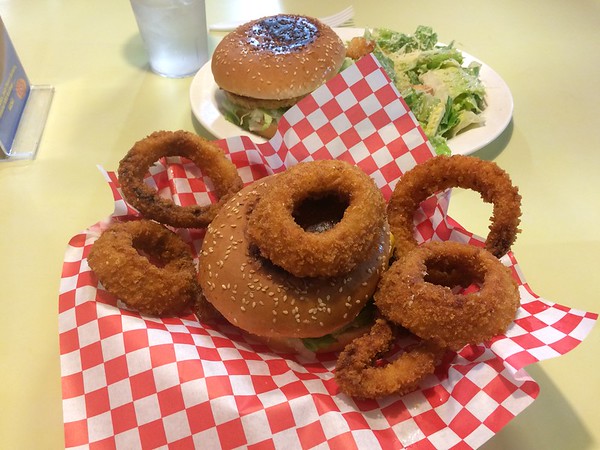