Lovely day for a hike

Our good friends invited us to join them for a hike at Wallace Falls State Park. Despite living in the PNW for quite a few years by now, we had never been to this park.  They are lots of fun to hike with and particularly good at providing photography advice, and the forecast was for a lovely day.  What's not to like?  So off we went!

To beat the worst of the Labor Day crowd, we agreed to meet at the trail head at 09:00.  At that hour of the morning the rain clouds were still dancing around, pretending they were going to let us have it, but we went anyway - the forecast was for mostly sunny skies, no chance of rain, and temperatures in the 70's.  At first, it seemed the clouds were not going to burn off, but as you'll see from the photos to follow, it's a good thing we went for that hike!

We had some unexpected entertainment on our way to the park.  Given Gertrude's prior performance (the GPS in our truck dash) on the Olympic Peninsula, we decided to give Waze a try.  It's been awesome for us in the past, so what's not to like?

Sadly, Waze decided, without telling us, that to get there, we had to drive right into the center of the park.  So, about a mile before we would have arrived at what turns out to  be the proper place to turn and which also has plenty of signs, Waze excitedly said, "Turn Left!"  The road looked pretty good, though we observed that it seemed a little odd to be turning here. Still, being good little GPS users, we turned left to see what Waze had in mind.

After we drove up a fairly steep hill and around a few curves, Waze next urged us to make a right turn.  Unfortunately, that road was a nasty mud & gravel track.  Lucky for us, it was chained off to prevent idiots from going that way.  So, with that, we turned around, put Waze to bed, went back down to Rt 2 and drove another mile into Gold Bar where there were plenty of signs to follow into the park. Later, we reported the map issue to Waze. They quickly got a repro and convinced Google to move its map marker for the park, which will help future Waze users get there without incident. You're welcome!

A few minutes later than planned, we met our friends in the parking lot at Wallace Falls State Park. As you may have surmised, this is an insanely popular hike.  It's only 2+ miles to a spectacular waterfall view, and the hike is graded as "medium" up to that point.  So if you want a place to park for your hike, you'll go there early on any day that's likely to be a bit crowded - like a major US Holiday.  When we arrived shortly after 09:00, the parking lot had tons of room, and we got a choice spot that would clearly be shady once the clouds burned off.

The hike started out a little drippy, with the humidity around 110%.  Leaves still had water on them, mist blew between the trees and through the valleys, and it was relatively warm, in the low 60's. This led to quick build-up of heat and even quicker removal of rain jackets as we hiked and the morning wore on.  It quickly became too warm to wear the jackets, even if the branches were still dripping on us a bit.  I was wearing my trusty lightweight Tilley hat, which also helped protect the camera from a few drips, so that was good.  It's not the same version of Tilley that an elephant kept snatching off her trainer's head and eating, but still a nice hat.

With that, here are a few pictures from our hike, using my new Nikon D750 and a trusty  50mm f/1.4 prime lens.  It's a great lens for walking in the woods - small, light, crystal clear, and very fast indeed. If it makes you feel cooler, think of it as a hipster fixie for photography!

Not all who wander are lost 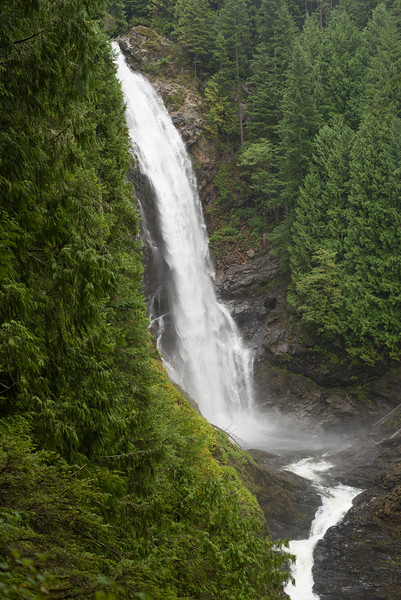